How to setup a masternode under an hour Part (1/4) 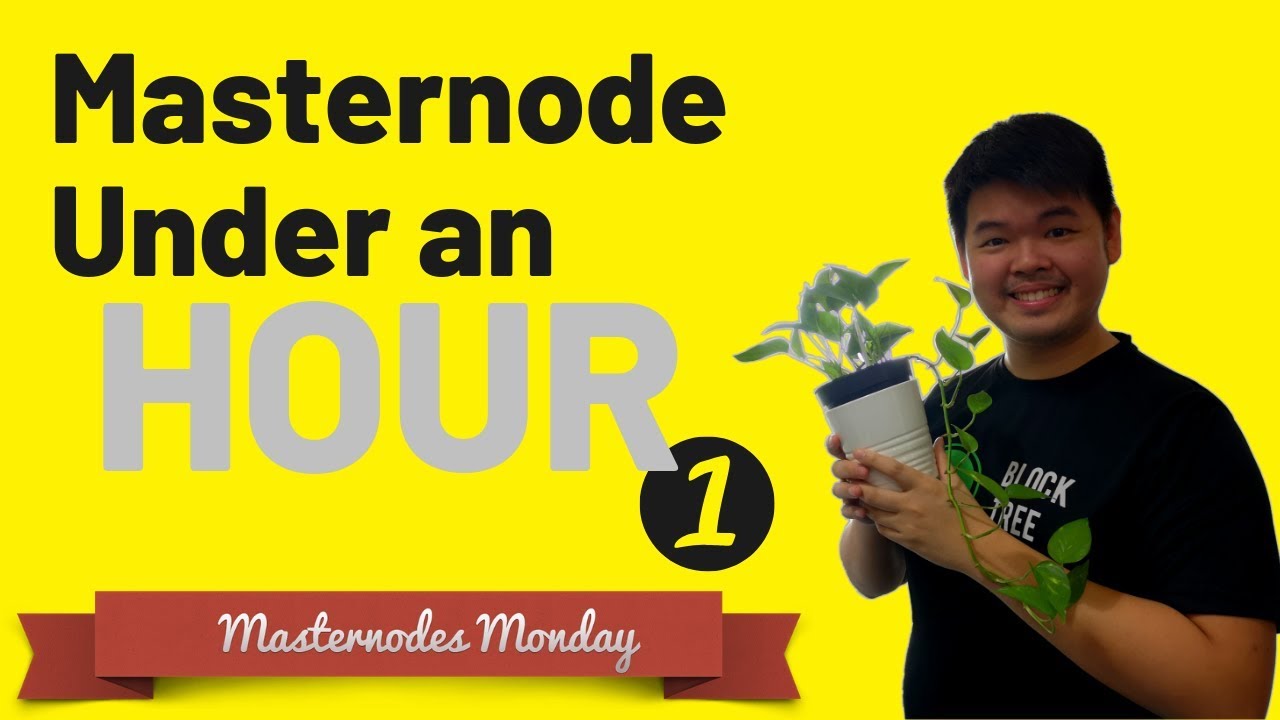 So, recently we purchased SafeInsure coin on the 18th of December 2018 which on the day of recording was ⅘ days away.

So based on the fundamentals that we mentioned, right?

Including things like liquidity, we looked at the budget that we want to spend which is not more than $10k.

We didn’t want to build a Dash or another Bitcoin. We wanted to build something that’s less than 5k USD.

So, we thought that Safe Insure would be a very good bet based on their whitepaper as it seems that it’s one of the the coins that we believe has a real use-case to it. So what we did is we built safe insure.

So, how long did it take?

[Treff] You mean the time spent?

[Leon] We built it in one hour?

[Treff] Less, less than one hour.

[Leon] Treff has the expertise.The first time you’re building it’s bound to cock up so no worries.Okay, so this is, these are our earnings. Right you can see that our masternode earnings over here.

[Leon] Over the past week,

[Treff] It’s not the masternode.

[Leon] So you see there’s a difference right?

We want to show everybody the difference between a masternode and aProof-of-stake, right?

So staking, I mean, different coins has different rewards right?

So you can see over here 18

You need to think about it guys..

1 coin is about 5 dollars right?

As I remember correctly, 5 dollars or something?

So, you look at the income that we made right?

This is like the true-blue passive income which requires no buying of hardware. It’s just software

[Treff] … Almost every one hour

[Leon] Every, every one hour okay?

[Treff] This one and…incoherent speech

So so guys it’s literally like passive income right, you’re compressing all the the..

The stress in like, traditional cryptocurrency mining when you buy a rig into..

For traditional mining, usually we wait for about 1 month to get 0.2 Ethereum or something right?

But for this one it’s like it’s on steroids. Literally it’s just boom boom it just goes, I get the coins.

Okay so now the good thing is the returns are faster alright, like you’d get a faster method of earning the money through masternodes and even Proof-of-stake as well.

Okay anyway if you are if you’re wondering what is 19 to 22? It’s just a little bit of error we did as it didn’t manage to connect but no worries.

It doesn’t affect at all. It’s not the.. It’s nothing to do with the masternodes problem. It’s actually our connection issue. So if you think about it over the past how many days we have earned about on average a day if it’s one hour per coin, we will earn 20 coins per day

also increased over the past few days so we earn not just the rewards.

Oh! The prices drop but let’s see the earnings still.

The amount that we use to come in

and the amount now it’s it’s about the same but because of the masternodes we actually make money, you got what I mean?

that means the in, the, the price back then and now is the same so that’s the good thing so we are not betting on, like a trading kind of mindset, right?

Trying to bet whether the things goes up or down. We’re not doing that

What we’re actually trying to do is to identify the coins such that it can be sustainable for quite a bit.

Then we jump in and jump out within short notice.

So the interesting thing is Aaron..

So, you must be wondering, who is Aaron? Aaron’s our friend from Colorado

Right, so he spearheaded this initiative, mining for humanity.

In return, we are giving 20% of the rewards to this initiative whereby it’s a pure charity where we’re gonna do some good.

To us, we believe that earning money is important for family. But I think more importantly is what we are empowered to do with all these new money that’s coming in right.

How good can that be, right?

You probably got to work

But through this, you just made that amount of money.

Okay, now because of that

We are gonna donate like a donation to Mining for Humanity.

We’re trying to do some good we want to add some value not just ah..

For you guys to earn some money but, we want to help people, who are less fortunate than us.

So we’re going to donate 20% of all our earnings through this SINS coin to Aaron’s initiative Mining for Humanity.

Alright so I would like to give props to Aaron, Aaron Nikolaus Cash.

You see, so that’s that’s a crazy part, we don’t take things for granted

Okay, and hence we’re gonna donate 20% of these earnings to Mining for Humanity. We always try to do good stuff when possible.

Okay, so that’s it for SINS masternode.

So it’s gonna hover around here so we’re gonna get out soon while the volume is still good so you can still trade the node.

Highlight for this week is that we made 10% profits in just 4 days which is really amazing if you think about it.

But it doesn’t guarantee that it will always happen.

You gotta prepare to offset a loss because previously we also talked about managing your masternodes portfolio like like a mini venture capital fund.

You expect probably only one coin to cover the entire fund, so if you got 10k, you just need one coin to make 10k profits and that’s it.

So I was surfing Facebook groups. I came across a few applications

And then I came across this coin, CrowdFund coin, the world’s first decentralized crowdfunding platform built on a blockchain.

So the interesting thing is, last year I bought this coin called KICK, KICK coin KICKO, KICKICO or something like that.

Think about it Crowd funding concept with masternodes.

So masternodes if done properly, like the block rewards.

Remember how I taught you guys about the block rewards? How it should be evenly spread across the period so it won’t be barred to, right?

You don’t want companies like CrowdFund coin to release all the rewards at the front leaving for none at the back.

What you want is to spread your rewards evenly such that

What Is a Blockchain?

In this video, Leon explains to you about blockchain using pictorial diagrams. Now in the current computing world, there's always a database where information gets stored. in some databases, they are also known as a ledger system.

One way of understanding blockchain is exploring the decentralize ledger system, which is the key idea behind the blockchain.

A very popular example people love to use to explain blockchain is the banks so I'll do the same. In the banking system, there's a website that is front-end, it's consumer-facing so consumers go to the banking website key in their information and start to transfer funds to each other. 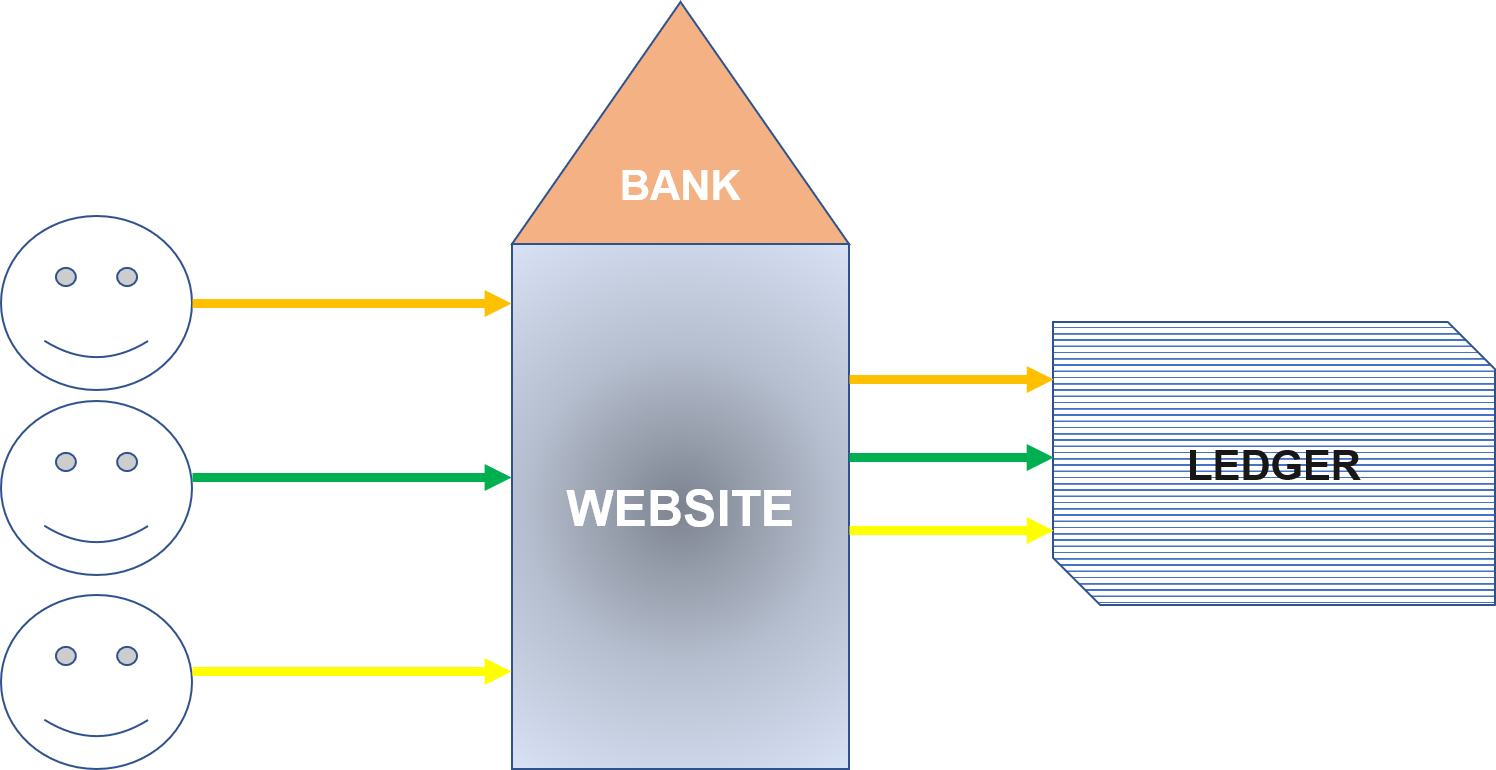 These numbers that you punched in gets recorded in the ledger system on the back end. So in a centralized world, all this information gets collected and consumed by the bank. An entity on its own. 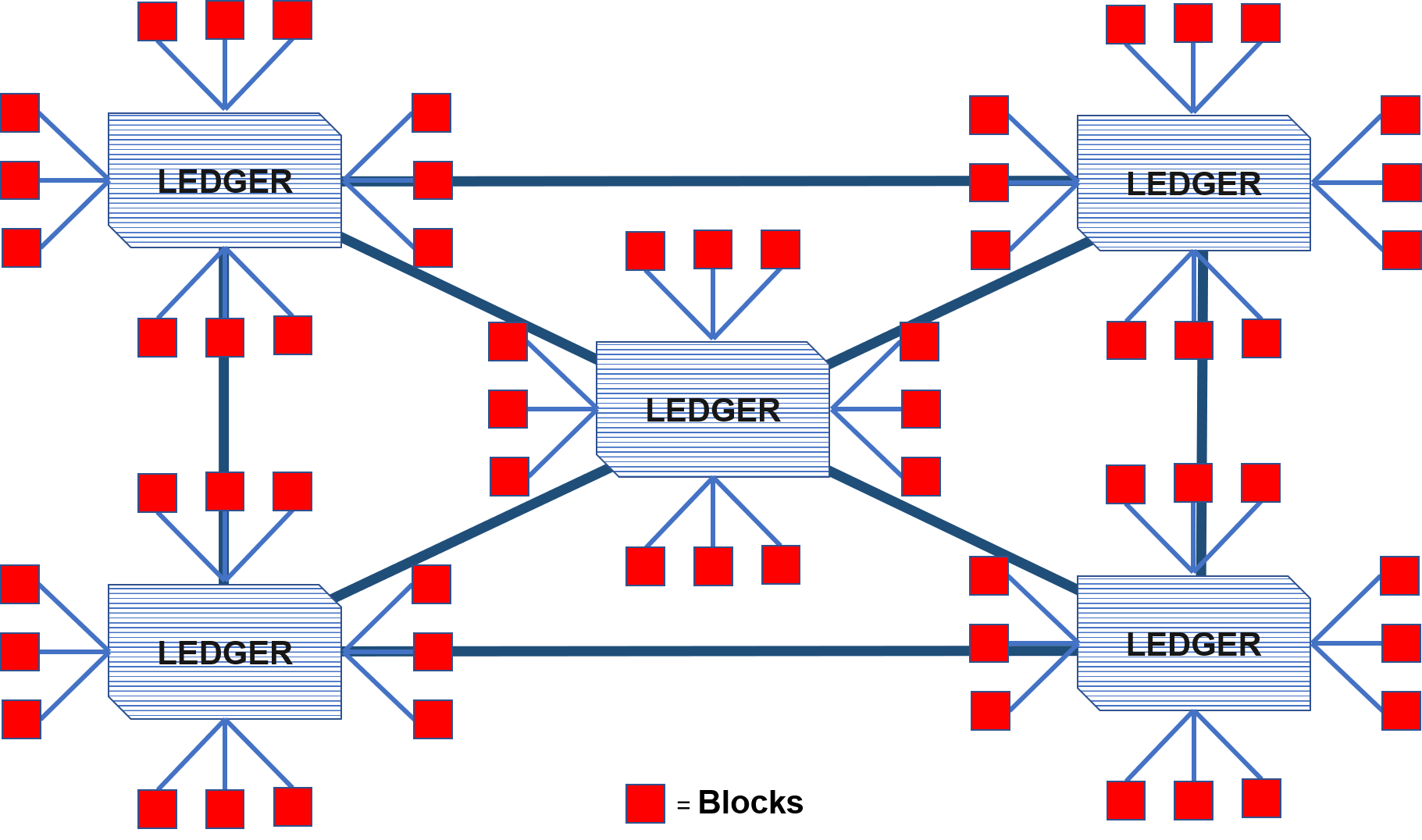 Now in the blockchain world, it's been argued that this ledger should be distributed out. So from a centralized place to a decentralized one. We're going to share and spread the data out to decentralized places, into what we call little blocks. Now, instead of having one central entity handle all the blocks, we have decentralized computers holding blocks of this information. You may be wondering, all these blocks of information, how are they organized into nice spaces.

So, all these blocks of information have locks inside them. In order to connect this system, what's needed to be done is to unlock the locks which then links up into one long chain, one long chain of blocks hence the name, blockchain. In order to unlock these little locks, a computing process is required to take place. In the computer world, it's called cryptography. To put it simply, it's to unlock the locks, in order for the blocks to connect together. Common processes normally used today are probably only two right now.

Examples of a Mining Machine/Rig: JUICY TURNKEY GPU RIGS and the ANTMINER S9 13.5-14 TH/S.[/caption]   One is Proof-of-Work(PoW) where you buy big mining machines, use a lot of electricity, in hopes of getting compensated by the blockchain for unlocking and connecting blocks together. That is PoW. 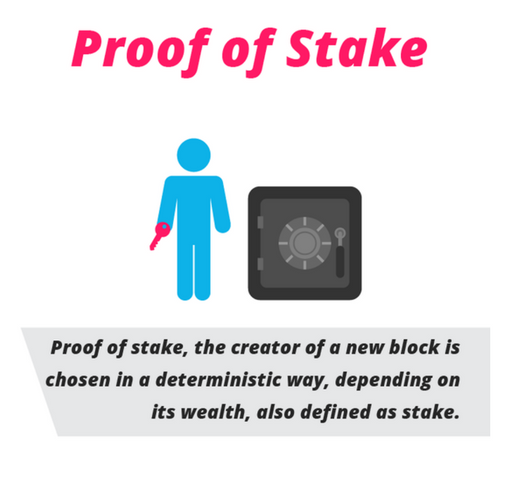 There's also another method called Proof-of-Stake(PoS) whereby you hold a certain number of coins in order to verify the blocks and unlock the little locks to connect all of them into one beautiful blockchain, thus getting rewarded by the blockchain. Basically, that's the reason why people want to mine and also the reason why people want to stake. By helping the blockchain connect all the messy, separate blocks, into one beautiful (organized) chain, gets you compensated.
Read More

In this video, Leon explains about masternodes and why people actually want to hold masternodes in a pictorial way.

So in the blockchain world commonly, there are two ways that people use to verify transactions.

Proof-of-Work (PoW) and Proof-of-Stake (PoS). Now, the only difference is PoW requires you to buy a miner, which you connect to the blockchain to verify transactions in return of a reward. PoS is similar in concept but instead of using a miner, you hold (crypto) coins in you wallet, and you stake them in order to verify transactions and get rewarded.

Now, masternodes operate on an entirely different level. So what's unique about masternodes in that case? I can give you some examples.

Firstly, you can perform InstantSend which is a way to send transactions almost immediately. Much quicker. InstantSend, okay? 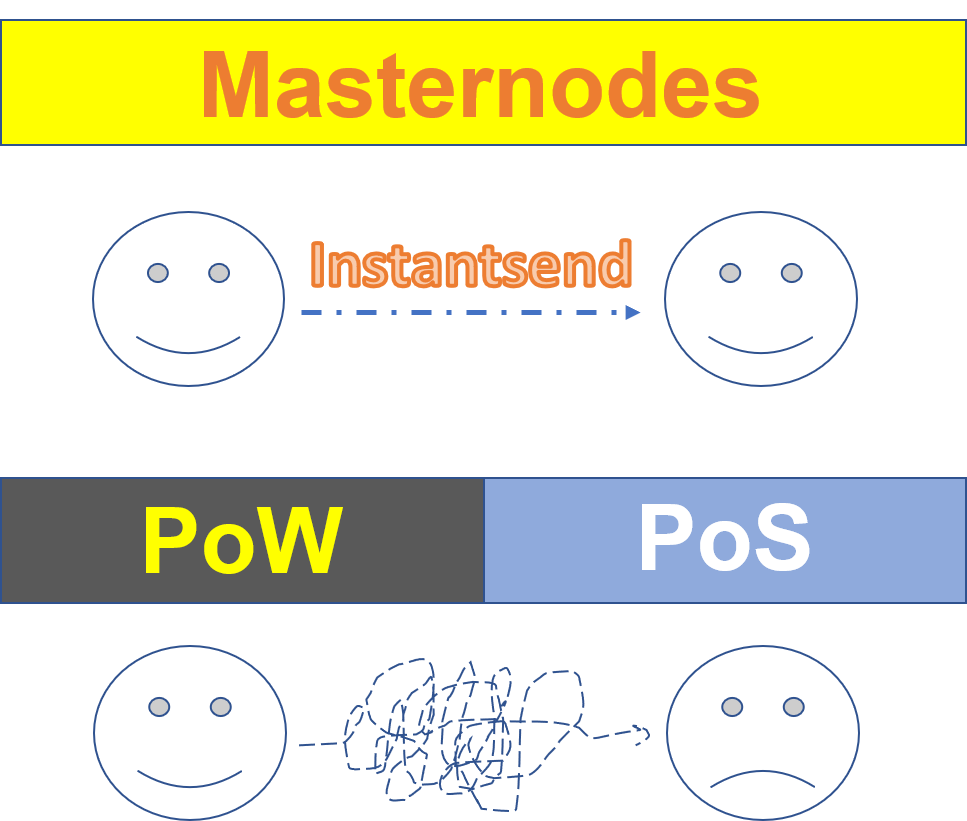 Number two. You can also do PrivateSend, which is an anonymous way to transfer/transact your coins.

And thirdly, by owning masternodes, you get the chance to vote, which I find very useful. 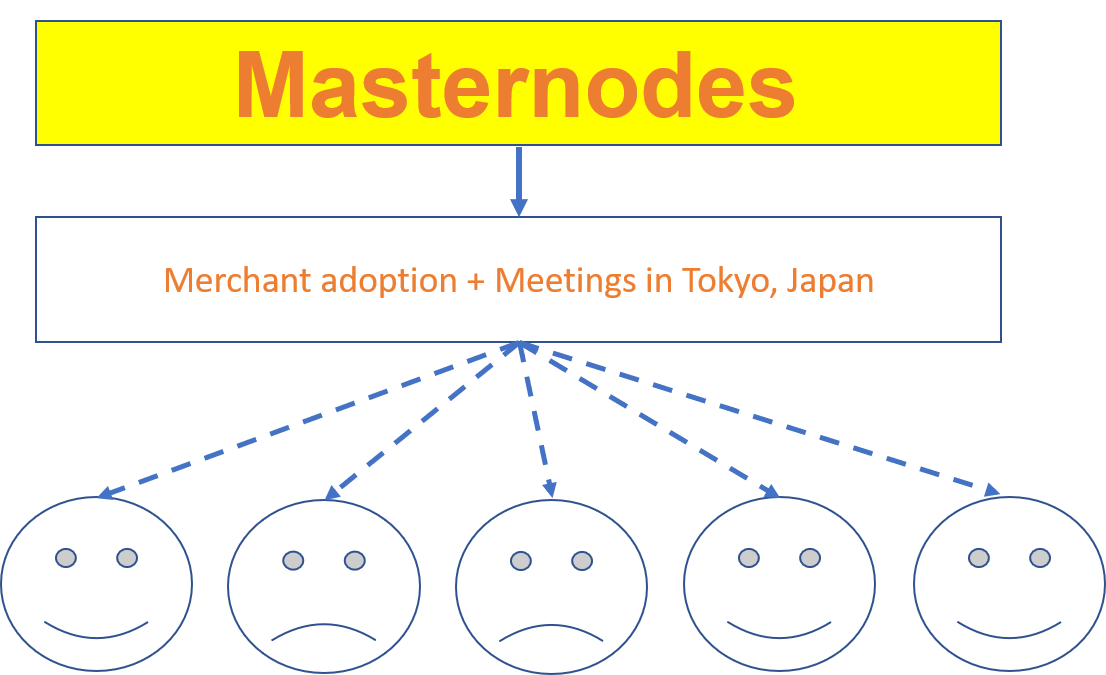 So in most masternodes blockchain, there is one component known as a treasury. Usually, you can vote on projects, that are going to be funded by the treasury. You can vote to decide whether to go through with the projects, or not. If you own a masternode, you have the power to cast a vote. Now besides having these capabilities, why else would people want to hold on to a masternode?

Very simple. The reason is that you can earn a consistent, passive income. As compared to PoW and PoS which gives you income that is based on probability, masternodes give you a consistent passive income. If you think about it, it's like having rental income. So when people start to discover the masternodes concept, the better and smarter way is to get involved as soon as possible. The faster you get involved with masternodes, the quicker you can start to generate your passive income. Hence, we have created the Masternodes Movement, and in our world, more than hundreds of people are generating passive income using masternodes, the way that I just mentioned. So if you have yet to start your journey, I look forward to seeing you there.
Read More

The #MasternodesMovement, founded by Block Tree Club, exists to show that Masternodes will play an important role in the future of cryptocurrency.